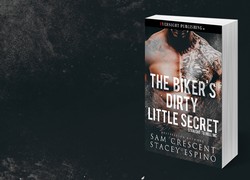 Did you know all my romance books, solo and co-written are SAFE from cheating? Even our darkest, naughtiest bad boys, including bikers, do not cheat on their women. Real life has enough troubles. Our romances are a true escape!

Check out our brand new release. It’s the second book in the Straight to Hell MC series, co-written with Sam Crescent

How can something so wrong feel so good?

Callie tries to look at the positive side of life—despite her dire circumstances. She’s the underdog, stepped on by her boss, her landlord, and her own family. When a new customer shows interest in her at work, it’s impossible to resist his charm. Their budding romance becomes her only joy in life, but when she finds out he’s keeping dark secrets, Callie wonders if she really knows him at all.

Brick knows he screwed up by hiding the truth from Callie. It just felt so damn good to be looked at with affection rather than fear, and he soon became addicted to the rush. Once he starts falling hard for her, he can’t bring himself to tell her he’s the VP of the Straight to Hell MC. Brick can’t risk losing her. But how long can he go on living a lie?

With a rival club rebuilding and a rat in their midst, Brick wonders if it’s even safe bringing Callie into his world at all.