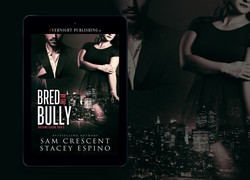 COMING MAY 25TH TO EVERNIGHT!

BRED BY THE BULLY (Breeding Season) co-written with Sam Crescent

Mira Davencourt sells her body to the devil…

When her only brother’s gambling debts get out of control, he turns to Drake Eastwood to bail him out. He’s the bully from her past, the one she’s tried to forget over the years. The ruthless businessman pays off Nigel’s debts, but he wants something in return—Mira. He demands her life, her body, and apparently her womb, but he’ll never have her heart. She reluctantly signs the contract to save her brother.

Drake wants to prove to Mira that he’s a different person from the bully he was in high school. He’s worked his way up the ladder of success with no help from anyone, only he didn’t realize how lonely it would be at the top. Now that Mira’s signed his contract, there’s no way he’ll let her go. She’ll breed his children and become his wife. In return he’ll wipe out her brother’s debts and make all her dreams come true. It sounds perfect on paper, but life rarely goes according to plan.